Facebook confirmed it’s testing a video speed-dating app called Sparked, after the app’s website was spotted by The Verge. Unlike dating app giants such as Tinder, Sparked users don’t swipe on people they like or direct message others. Instead, they cycle through a series of short video dates during an event to make connections with others. The product itself is being developed by Facebook’s internal R&D group, the NPE Team, but had not been officially announced.

They also characterized the app as undergoing a “small, external beta test” designed to generate insights about how video dating could work, in order to improve people’s experiences with Facebook products. The app is not currently live on app stores, only the web.

Sparked is, however, preparing to test the experience at a Chicago Date Night event on Wednesday, The Verge’s report noted.

During the sign-up process, Sparked tells users to “be kind,” “keep this a safe space,” and “show up.” A walkthrough of how the app also works explains that participants will meet face to face during a series of 4-minute video dates, which they can then follow up with a 10-minute date if all goes well. They can additionally choose to exchange contact info, like phone numbers, emails, or Instagram handles.

That experience, which takes place inside Facebook itself, first launched in 2018 outside the U.S., and then arrived in the U.S. the following year. In the early days of the pandemic, Facebook announced it would roll out a sort of virtual dating experience that leveraged Messenger for video chats — a move came at a time when many other dating apps in the market also turned to video to serve users under lockdowns. These video experiences could potentially compete with Sparked, unless the new product’s goal is to become another option inside Facebook Dating itself. 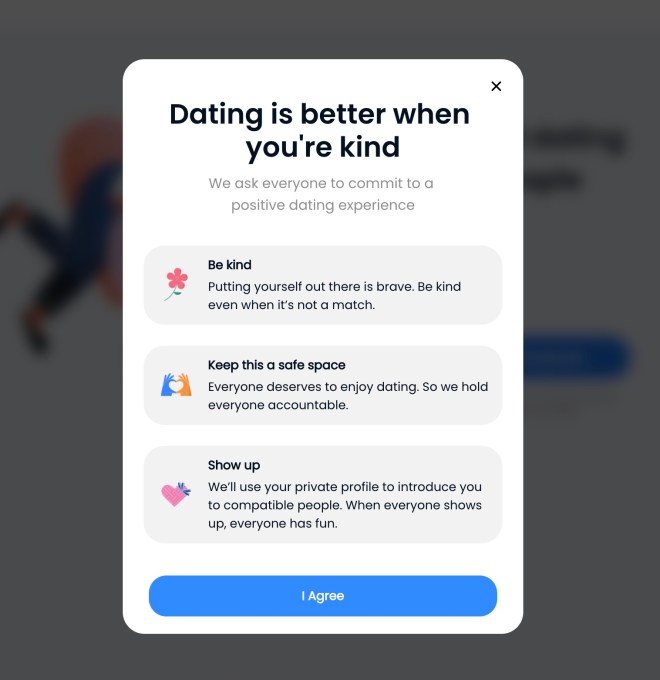 Despite the potential reach, Facebook’s success in the dating market is not guaranteed, some analysts have warned. People don’t think of Facebook as a place to go meet partners, and the dating product today is still separated from the main Facebook app for privacy purposes. That means it can’t fully leverage Facebook’s network effects to gain traction, as users in this case may not want their friends and family to know about their dating plans.

Facebook’s competition in dating is fierce, too. Even the pandemic didn’t slow down the dating app giants, like Match Group or newly IPO’d Bumble. Tinder’s direct revenues increased 18% year-over-year to $1.4 billion in 2020, Match Group reported, for instance. Direct revenues from the company’s non-Tinder brands collectively increased 16%. And Bumble topped its revenue estimates in its first quarter as a public company, pulling in $165.6 million in the fourth quarter. 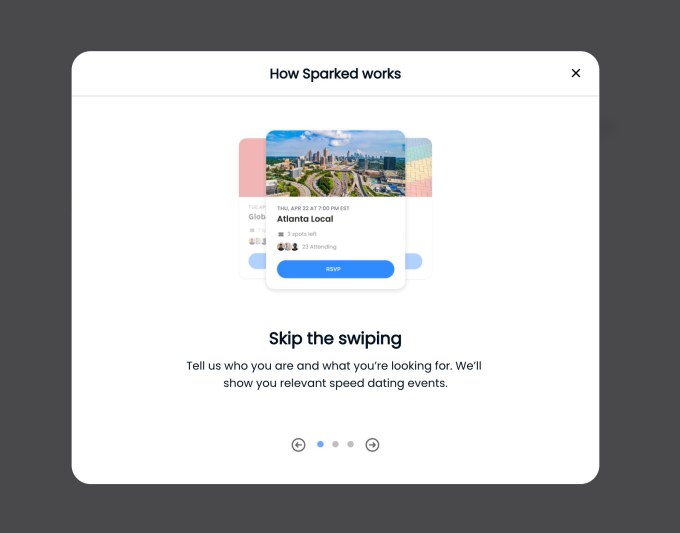 Facebook, on the other hand, has remained fairly quiet about its dating efforts. Though the company cited over 1.5 billion matches in the 20 countries it’s live, a “match” doesn’t indicate a successful pairing — in fact, that sort of result may not be measured. But it’s early days for the product, which only rolled out to European markets this past fall.

The NPE Team’s experiment in speed dating could ultimately help to inform Facebook of what sort of new experiences a dating app user may want to use, and how.

The company didn’t say if or when Sparked would roll out more broadly.