Facebook announced this morning it’s bringing a number of new features and services to its family of Portal devices, including support for Netflix and Zoom. The company will also introduce easier ways to launch Netflix and other video streaming apps via one-touch buttons on its new remote, in addition to expanding its selection of its stories offered through its Story Time feature, adding new ways to use AR effects, and introducing Spanish-language voice control, among other things.

Portal TV, the media device that works with your TV at home, today offers access to a range of streaming services, including Amazon Prime Video, Showtime, and Sling TV. But, until now, one of the most important streaming services — Netflix — had been missing. Facebook says Netflix will now be introduced to Portal TV in all countries where Portal is sold.

It will also introduce a new remote that will include one-touch buttons for launching streaming apps, like Prime Video, Netflix, and its own Facebook Watch. This will ship with new Portal TV devices starting today and will be sold in stores in the coming weeks.

The news of Portal TV’s Netflix integration follows shortly after Amazon’s September announcement that it would support the popular streaming service on its own Amazon Echo Show smart displays, three years after the Echo Show line’s original debut. Google, too, recently added Netflix to its smart display lineup, with support arriving on its Nest Hub and Hub Max earlier this year.

The timing of these updates hint that negotiations with Netflix over smart display integrations had been taking place industry-wide, as Netflix worked to make to make its service available across the various platforms.

Facebook will also bring Zoom to its Portal devices for video-calling. Back in August, the communications service had announced its plans to support smart displays, including Echo Show and Google Nest Hub Max, as well as Portal from Facebook.

With Portal support, Zoom users will be able to host a video call with up to 25 people on the screen, while leveraging the device’s high-fidelity sound and its AI-powered Smart Camera for hands-free calling. The support will be adding to Portal Mini, Portal, and Portal+ in all regions where the device is sold. 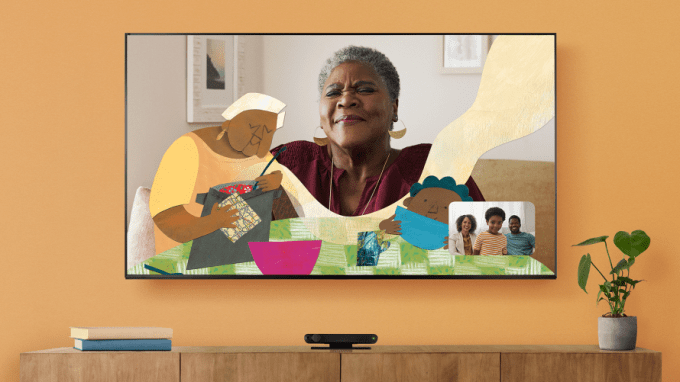 As previously announced at Facebook Connect, the company is also expanding its collection of interactive stories in its Story Time library with more diverse content. New stories include Thank You, Omu!, A Kids Book About Belonging, and Grandma’s Purse. Plus, AR features are being added to  Dr. Seuss stories, including Hop on Pop, Mr. Brown Can Moo! Can You?, The Foot Book, and There’s a Wocket in my Pocket! These will roll out sometime this fall.

Portal’s AR features are getting an update, too. Users will be able to control AR effects in Photo Booth using their voice and the “Hey Portal” command to send themed cards and take photos and video with AR effects to send to friends and family.

“Hey Portal” will also now work in U.S. Spanish, in addition to English, with more languages expected to come in the future. On-screen text on Portal can be displayed in French, Spanish, Italian, and English, however.