Despite producing global hits like “Squid Game” in 2021, Netflix’s fourth quarter returns show the streaming giant struggling to maintain a lead over its competitors. The company fell short of its projections for new subscribers this quarter, adding 8.3 million as opposed to its projected 8.5 million — it also projects to add just 2.5 million subscribers in Q1 2022, down from 4 million last year (the company says this is because it has “a more back-end weighted content slate” for the quarter). Overall, this year marks a downward trend in subscriber growth — its the company’s lowest growth year since 2015 and about a 50% decrease from its pandemic-inflated 2020 numbers. 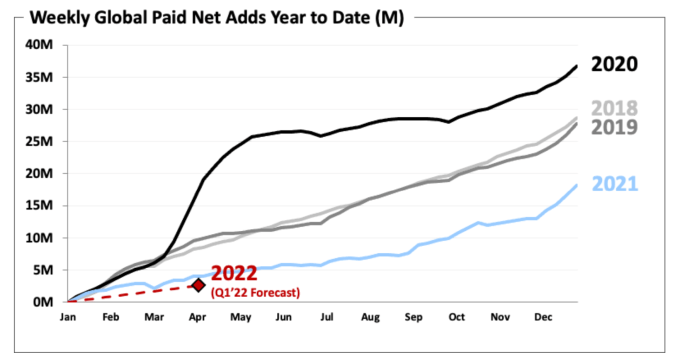 “Consumers have always had many choices when it comes to their entertainment time — competition that has only intensified over the last 24 months as entertainment companies all around the world develop their own streaming offering,” the company wrote in its letter to shareholders, admitting that “competition may be affecting [its] marginal growth some.”

While Netflix has about 222 million total subscribers, larger conglomerates like Disney (which also owns Hulu and ESPN) have continued to expand at a more aggressive pace. Disney ended 2021 with 179 million total subscribers across Hulu, Disney+ and ESPN+, and it plans to double the number of countries that Disney+ is available in by fiscal 2023. Disney also announced the creation of an International Content and Operations group to expand its direct-to-consumer streaming internationally. HBO Max is growing too — the company said that December had been its most-viewed month since the service’s launch in May 2020.

Netflix announced last week that it plans to raise subscription prices in the US and Canada, while in India, the platform lowered its prices to try to attract more consumers after six rocky years in the massive entertainment market. Netflix is also experimenting with another new revenue stream: gaming. The company recently acquired the gaming studio Night School and has developed games based on its own IP, like the hit show “Stranger Things.” If this week’s biggest tech stories tell us anything, it’s that gaming can be very lucrative. As expected, Netflix says it will expand its portfolio of games in 2022.

Another new avenue for Netflix to grow its subscriber base lies in content marketing — the company launched a website called Tudum last month, hiring entertainment journalists and editors from publications like Allure, Vanity Fair and Bitch Media to share exclusive content about Netflix originals.