The rapid on-demand grocery and convenience delivery craze that has taken over Europe and the U.S. this past year is gradually making its way into Africa and the Middle East.

Today, the spotlight is on RabbitMart, or Rabbit for short, a startup coming out of stealth with $11 million in pre-seed funding. Rabbit is the latest of a long list of startups investors are willing to pump money into globally to deliver groceries and other items from neighbourhood fulfilment centres to people’s homes in 20 minutes or less.

In Egypt and Africa at large, Rabbit is one of the pioneers alongside Breadfast, which recently announced that it would begin to complete deliveries in less than 20 minutes.

Ahmad Yousry, Walid Shabana, Ismail Hafez and Tarek El Geresy founded Rabbit in June. CEO Yousry, in an interview with TechCrunch, said the founders began discussing the idea of replicating fast delivery models in Egypt after noticing that he constantly experienced a sequence of slow and failed deliveries whenever he ordered groceries.

On a surface level, groceries are items people forget to buy and panic when they suddenly need them, which is why most on-demand platforms in Europe, such as Getir and Gorillas, launched first in that vertical. But over time, they found out that on-demand retail — offering other items that an impulse buyer would need in, say, a supermarket — was a bigger market and opportunity.

It was the case with Yousry and his co-founders; they studied use cases where people bought stuff from e-commerce platforms but would wait days to get it and settled on basic fashion items, cosmetics, toys and household items.

“Whatever the consumer wants under 20 minutes, we’re going to let the market dictate what we sell. We’re not limiting ourselves as a grocery player,” he said, differentiating the company from other grocery delivery platforms such as GoodsMart and Appetito in Egypt. 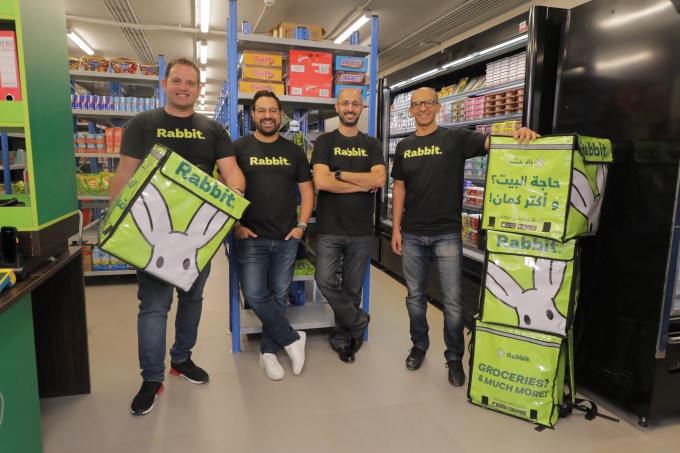 Rabbit operates similarly to other international on-demand convenience delivery startups before it. It has taken the Amazon model, large warehousing and broken it down into small pieces — micro-fulfilment centres — in four neighbourhoods across Cairo: Mohandeseen, Zamalek, Maadi and Nasr City.

Rabbit buys these five categories of items (groceries, basic fashion items, cosmetics, toys and household items) from third-party suppliers, stores them in its warehouses, adds a markup and sells through an app with a flat delivery fee for customers.

The company says it controls the end-to-end experience on its platform. It has a live inventory tracking system in its warehouses to monitor what’s on the shelf and equip riders — some employed, some self-employed — with the necessary protective gear and technology to make the deliveries. The six-month-old startup plans to add a new fulfilment centre every other week till the end of the year to cover several major cities in the next 12 months.

Rabbit has been in stealth since June and only launched last month. In its first two days, about 30% of the orders delivered were completed in less than 20 minutes; last week, the number increased to 90%.

“The way we look at it is straightforward. If McDonald’s can deliver sandwiches in 30 minutes, and they still have to make the sandwich, then if we get things right, we can easily deliver in 20 minutes.”

Many publications covering the frenzy happening within the on-demand convenience delivery space have probed the question of whether these companies can fulfil their delivery times without breaking their riders. It’s a situation Gorillas has faced this year; in a bid to execute deliveries in less than 10 minutes, it has attracted protests from some drivers demanding improved working conditions.

Yousry says Rabbit’s tech and operations are such that an in-house team takes care of receiving an order and packaging in 120 seconds or less. Then, the rest, about 18 minutes, is left for drivers to complete the order. This way, Yousry hopes the company will not have to be at loggerheads with its drivers.

“That’s exactly the reason why we went with 20 minutes and not 10. We could easily do 10 minutes, but if we do, we’re stretching our delivery riders aggressively and it wouldn’t account for their health and safety,” said Yousry.

“For us, there are two minutes under the roof, and there’s the rest on delivery time; it gives the couriers time to drive safely. They don’t need to rush, and they abide by traffic regulations and take things slower.”

So far, only a few people have used the service, and while Yousry does not give hard numbers on traction, he said the company now completes more than 50 orders per location daily.

He expects Rabbit to process hundreds of thousands of orders per month soon. But with a little more than 50 riders, how does it plan to achieve that? The CEO said the company is currently recruiting over 100 roles across driver, in-store and human resources departments to meet the high influx of demand it expects after going live.

Speaking on the investment, Lorenzo Franzi, a partner at Global Founders Capital, said, “The Rabbit team is setting a totally new standard for the grocery industry in Egypt and the broader region. They offer a new experience to customers compared to traditional grocers and local stores.”

On the other hand, Talal Alasmari of Raed Ventures said his firm backed the four-month-old startup because the founders have the vision and expertise to lead the “ultra-fast delivery domain” in Egypt, the Middle East and Africa.