Stripe has made its second investment in India, just days after disclosing the first. One of the world’s most valuable startups has backed Bangalore-based SaaS fintech firm Clear, the two said Sunday evening.

The 10-year-old Indian startup, formerly known as ClearTax, said it has raised $75 million in its Series C funding. The round was led by Kora Capital. Stripe, as well as Alua Capital, Think Investments and several other existing investors participated in the round, which brings the startup’s all-time raise to over $140 million. The new round values the Indian startup at over $700 million, according to a person familiar with the matter.

The startup says over 6 million individuals, and more than 1 million small and medium-sized businesses and over 30,000 enterprises use its platform.

In the past 18 months, said Archit Gupta, Clear founder and chief executive in an interview with TechCrunch, the startup’s SaaS platform has grown five times. Clear said it processes over 10%, up from 3% in 2016, of India’s business invoices with a GMV of $400 billion. 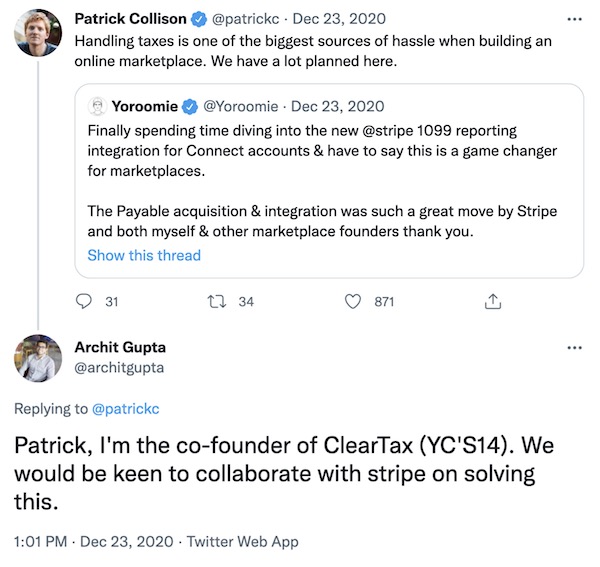 Clear’s marquee offering, ClearTax, started at a time when e-filing was not as popular in India. But the startup found itself in a good spot thanks to government regulations in the following years. (The government made e-filing mandatory in the country five years ago, for instance.)

But the number of people in India, home to 1.4 billion people, who pay taxes is still fairly low. (Only about 60 million individuals pay taxes in India.) That has been one of the reasons why Clear has expanded its offerings to serve businesses and also broadened to services such as credit and wealth management.

“We are excited to partner with Clear as they innovate at scale in the Indian SaaS ecosystem, enabling enterprises and SMEs to automate their workflows around taxation, invoicing and several other adjacencies,” said Nitin Saigal, Kora’s founder and CIO, in a statement.

Gupta said the startup will deploy the fresh funds to broaden its offerings and is also beginning to expand overseas. Clear, which is already serving businesses in the Middle East, plans to expand to cater to similar businesses in Europe soon, he said.

“We welcome Kora, Stripe and our other incoming investors. Kora has strong experience in technology players in emerging markets and Stripe is a global technology company that builds economic infrastructure for the internet – we are excited to learn from both of them,” he said.

“India is on a massive digitisation journey and we are fortunate to be in the perfect storm of electronic invoicing, GST, UPI, cheap mobile internet and rapid adoption of technology due to Covid-19. We are doubling down on our SaaS platform to help businesses with collateral free debt and payments. This funding also gives us fuel for our international expansion.”

Stripe has yet to enter the Southeast Asia and India markets in a meaningful way. The firm has teams at both the regions, but has yet to make inroads in either. If it chose to expand to the world’s second largest internet market, it would compete with YC and Sequoia Capital India-backed Razorpay, which recently received funds from Salesforce and was last valued at $3 billion. Like Clear and Razorpay, Stripe is also backed by Y Combinator.

Stripe has already backed at least one more Indian startup, according to sources.