NFTs took off in many corners of the world last year, but the trading of the fast-growing blockchain-powered and verifiable digital assets is yet to make inroads in India. Now a local startup – backed by high-profile investors Tiger Global, Sequoia Capital India, Coatue Management, and Dapper Labs – believes it’s cracked the code to win customers in the world’s second largest internet market.

FanCraze on Thursday launched its digital assets that capture moments of a game that is very familiar to – and often a crucial part of – 1.3 billion people’s lives: cricket.

An alien game to most Americans (their loss), cricket is one of the most engaging and popular sports in several parts of the world. Its overall fan following eclipses those of several other popular sports put together.

Such is its popularity in certain parts of the world that global giants Netflix and Prime Video are struggling to face off against India’s Hotstar, an on-demand streaming service that has won over 300 million users thanks largely to its large catalog of cricket streaming rights.

Hotstar, which became part of Disney after the $71.3 billion acquisition of 21st Century Fox, is now a key player in the American conglomerate’s world expansion plans. FanCraze is now attempting to cash in on the game’s popularity with NFTs.

These NFTs capture some of the game’s most iconic moments, including MS Dhoni getting India to victory in the 2011 World Cup with a six at the Wankhede stadium, South Africa’s infamous fumble against Australia, Yuvraj Singh’s unforgettable 6 sixes, and Sachin Tendulkar hitting the ball over the park in a stand-off against Pakistan in the 2003 World Cup.

Key to delivering these iconic moments is an exclusive, multi-year partnership that FanCraze has inked with ICC, the global governing body for the game of cricket. The startup has also individually partnered with several cricketers including Rohit Sharma, Jonty Rhodes, Muthiah Muralidaran, Ravichandran Ashwin and Jasprit Bumrah to offer additional exclusive moments, FanCraze founder and chief executive Anshum Bhambri told TechCrunch in an interview.

“I have been a big cricket fan all my life, as most Indians are. As an NRI, watching the same YouTube videos again and again has given me great comfort and solace in the middle of sleepless nights. Those moments are invaluable not only to me, but to billions of people across the world,” he said.

“ICC has given us the archive of video footage and still images that goes back 50 years to today. That archive and the rights to them always existed in big fat legal contracts. What NFTs have done is make those IPs liquid and tradeable by parsing them into small parts – 50-60 second videos and still images – that are now verifiably ownable and provably scarce due to blockchain technology, so that you can specify how many copies of a moment could exist and can prove who is the owner of each copy without having to rely on a third-party to verify the truth,” he said. 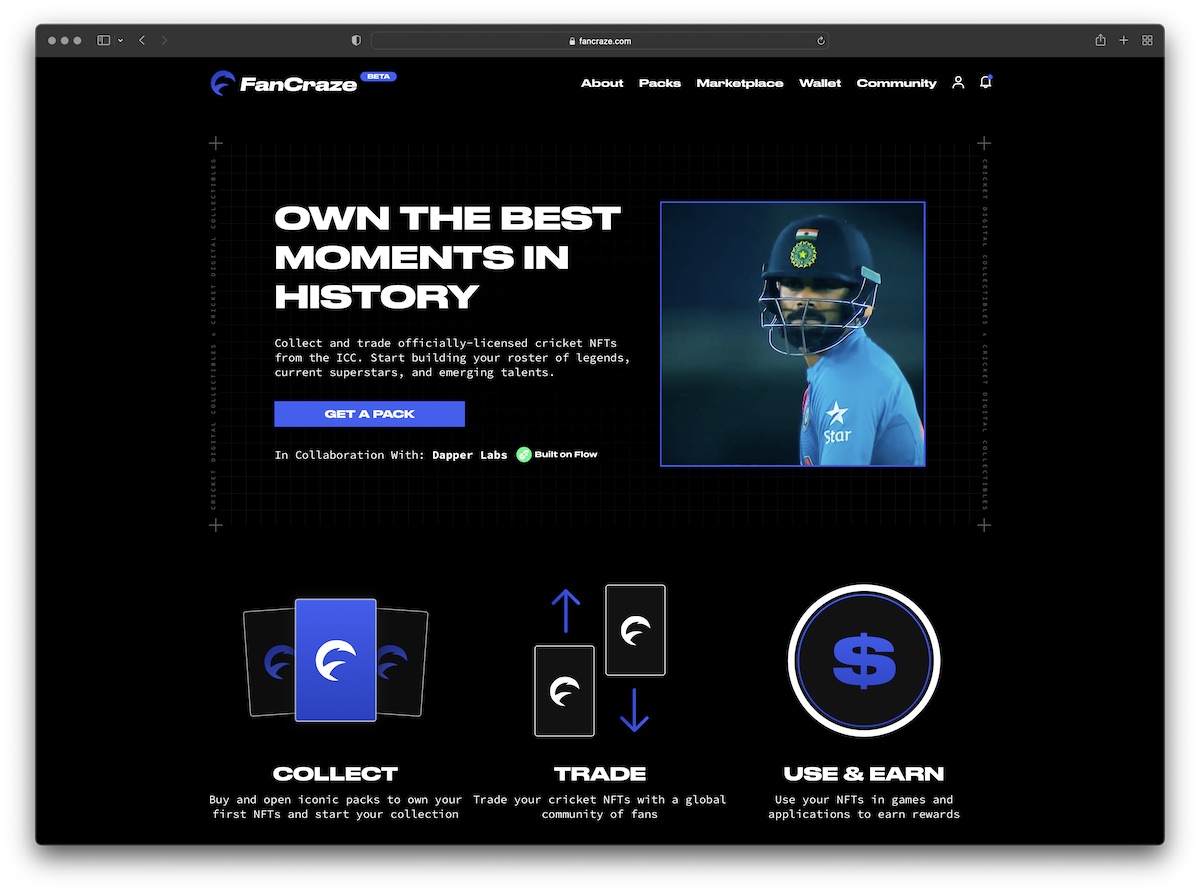 At the heart of FanCraze – and similar NFT startups such as NBA Top Shot and SoRare – is the idea that fans are building a more direct relationship with creators and athletes and the two are able to make and reap the vast majority of the benefit out of the value they create.

NBA Top Shot, the licensed NBA “moments” on the Flow blockchain from Dapper Labs, processes tens of millions of dollars in sales each month. Its NFTs – something proponents say is the future of collecting assets while skeptics term them as an absurd form of speculation – have minted several millionaires in fans.

The web3 idea — flipping the model on who derives most value in a transaction — is in direct contrast with the business models of scores of large firms across the globe. In each IPL cricket tournament season, it’s the platforms such as Hotstar that end up making more money than BCCI and other cricket boards or, you know, cricketers.

I asked Bhambri if he plans to expand FanCraze to more categories and businesses. The startup may expand to other sports and has long-term ideas for expansions, but he said cricket NFTs – or “Crictos” – will be its chief offering for a few years.

FanCraze is also making the experience of purchasing these digital assets very simple in a bid to make NFTs accessible to the masses. Typically, when an individual is looking to purchase an NFT or a different crypto asset, they have to identify the blockchain it’s trading on and understand how to operate the right wallet and then buy the native token they need to make the purchase and pay the transaction fee.

FanCraze is allowing users to purchase the NFT with multiple payment options, including plastic cards, wallets and UPI in India. (Users from outside of India can also buy the NFTs.) Once a user has made the purchase, a ledger record of it is automatically made on the Flow blockchain.

The startup today launched three different packs of NFTs, starting as low as $9 apiece. Later this week, FanCraze says it will launch its marketplace where users will be able to trade the NFTs. FanCraze is also developing cricket-based games where these NFTs will be used in gameplay and to earn in-game karma points, hence increasing the utility of the NFTs, Bhambri said.

“These karma points can be used to upgrade or craft the NFTs (wherein crafting is the process of changing the NFTs’ attributes or meta-data). Upgraded NFTs are more powerful in the gameplay, which in turn improves the user’s winning chances. Users can choose to sell the crafted NFTs and karma points to other users,” he said.